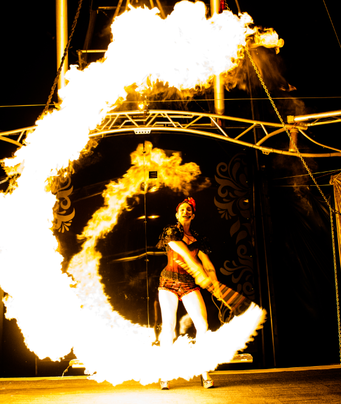 "★★★★★ Fuego Carnal is a fiery feat of daredevil vigour and an absolutely don't miss out, must-see show..." -  RIP IT UP
"★★★★★ It is clear these performers are at the top of their field. If you want to see exhilarating circus at its best, this is it!" - FRINGEfeed
"★★★★★  Fringe at its finest” - The Adelaidian
"★★★★★ THIS is Circus flambé indeed, full of the wow factor that takes circus well out of the ordinary" - The Advertiser

Fuego Carnal is a heart racing display of strength, skill and sauciness. Year after year, Fuego is claiming 5 star reviews, awards and the hearts of those who saw it.

Fuego is Spanish for fire and this is the thread that holds the show together.  Creating a vibe rich in subterranean spice, our performers from across the globe flirt with extreme circus fire, the audience, aerials & acrobatics, masterfully pirouetting with danger at death-like-degrees. This high risk spectacle produced by internationally acclaimed Dream State Entertainment (AKA Dream State Circus) is combined with stunning sound and visuals by world renowned music producer Dustin Bint "The Alchemist"; and offers pure exhilarating entertainment!

Keep an eye out to see when this show is next performing near you and experience safely from the edge of your seat extreme circus up close and very, very personal.